The city of Jacareí, in the Paraíba Valley, reported flash floods on 26 March 2018. Several streets were flooded due to the high precipitation rates (https://g1.globo.com/sp/vale-do-paraiba-regiao/noticia/temporal-causa-alagamentos-e-agua-invade-creche-em-jacarei-sp.ghtml).

The São Paulo-SP 12 Z sounding depicts a moist layer at low levels and a temperature inversion at nearly 600 hPa. Above the inversion, the southerly winds are relatively strong. After strong radiative heating, the instability of this profile increased significantly.

The storm is shown below. It persisted over Jacareí for about 1:30h, and this slow movement was determinant in the flash flood. VIL values over Jacareí were greater than 40 mm for more than one hour. 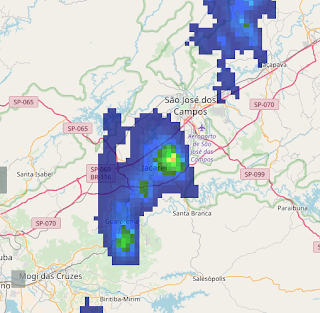 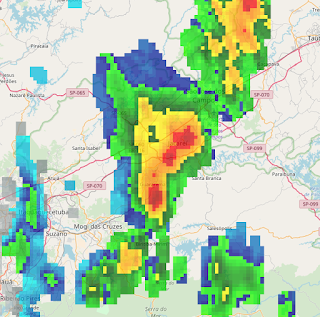 The afternoon and night of 20 March 2018 were marked by heavy precipitation in the eastern half of São Paulo sate. Several cities reported damage due to fallen trees, flash flooding, and huge amounts of lightning. São José dos Campos reported small hail (https://g1.globo.com/sp/vale-do-paraiba-regiao/noticia/sao-jose-dos-campos-tem-chuva-de-granizo-na-primeira-tarde-do-outono.ghtml), Guaratinguetá had flash flooding (https://g1.globo.com/sp/vale-do-paraiba-regiao/noticia/temporal-provoca-alagamentos-em-casas-e-ruas-em-guaratingueta.ghtml) and in São Paulo 95 trees fell and 2 people died, along with the impressive amount of 14 thousand lightning strikes over the city (https://g1.globo.com/sp/sao-paulo/noticia/cerca-de-mil-pessoas-estao-fora-de-casa-apos-chuva-em-sp-62-arvores-e-14-mil-raios-cairam.ghtml).

The synoptic-scale environment was characterized by a trough in southern Brazil with attendant cold front over the coast of Paraná state. The cold front was not moving too fast north. However, there was an abrupt change in the lo-level wind direction over Paraná and São Paulo states, which directly increased low-level convergence over São Paulo. Below are the 18Z and 00Z 925-hPa specific humidity and winds, showing the change in wind direction over São Paulo state during the precipitation event. 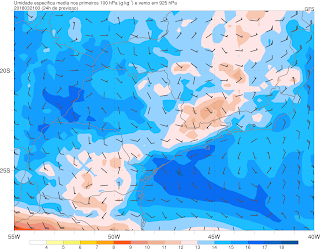 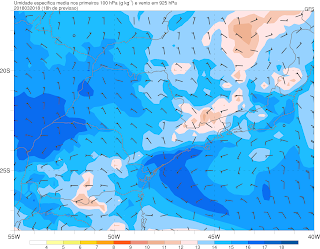 Another feature that probably played a significant role was the upper-level jet located over southern Brazil, which moved about 200 km to the north along with the upper-level trough and surface front (below). São Paulo state was located in the equatorward entrance region of the jet, where ascent is enhanced by the ageostrophic circulations of the jet. 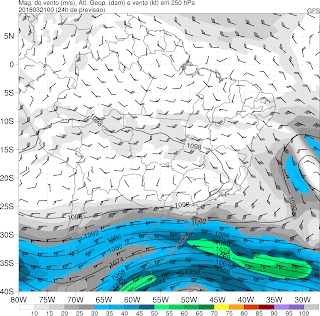 The radar imagery depicts de formation of several storms during the afternoon, and upscale growth in early night as ascent increased over the area. Some squall lines accompanied the precipitation area. 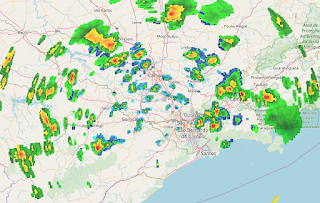 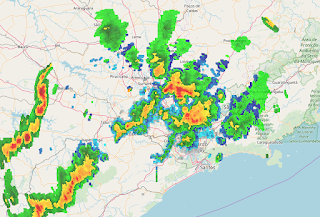 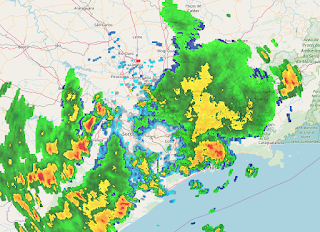 Several cities in eastern São Paulo state were affected by heavy precipitation and severe winds on the afternoon of 14 March 2018. In Campinas, winds greater than 85 km/h were reported, resulting in fallen trees and damage to buildings (https://g1.globo.com/sp/campinas-regiao/noticia/temporal-em-campinas-e-valinhos-tem-vento-a-85-kmh-e-queda-de-arvores.ghtml). 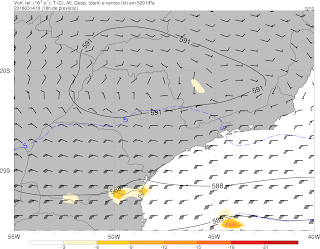 Moisture was not a problem in the area, where dewpoints reached more than 20 °C in several locations. The 850-hPa flow (below) shows moderate northwesterly flow in the region in association with specific humidity in the lowest 100 hPa of more than 15 g/kg, which characterizes a very moist (and buoyant) planetary boundary layer. 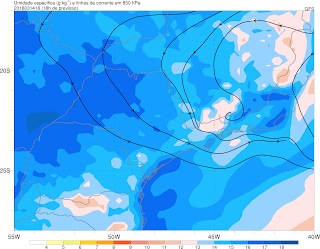 The 12Z São Paulo sounding (below) depicts a very unstable profile for the morning. With the expected diurnal heating, temperatures rose to more than 33°C, and CAPE increased to more than 2500 J/kg (second figure below). Also, the winds were relatively intense in the lower and mid troposphere, which favored severe storms. 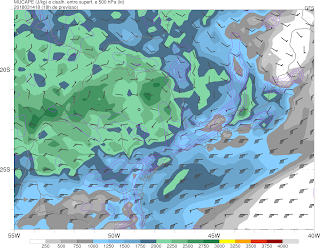 The storm that affected Campinas is shown below. The storm formed over the Campinas area at 00:40 UTC (first figure below) and caused intense precipitation. It soon evolved to a bow echo at 01:30 UTC (second figure below), which is generally associated with high winds. 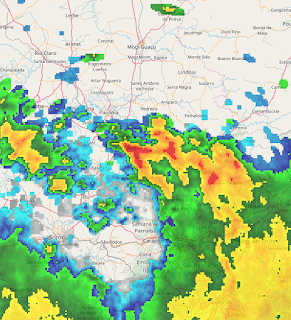 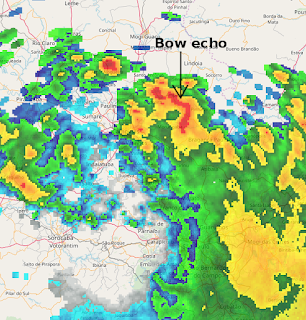 The VIL was also high (> 40 mm) over Campinas as soon as the storm formed, and indicated a high-precipitation storm. The high precipitation was likely responsible for the bow echo formation as the cold pool spread over the surface. 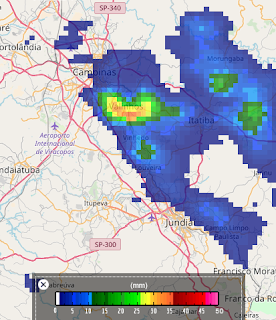 Some cities in the Paraiba river valley experienced strong winds in the afternoon of 05 March 2018. In São José dos Campos, the wind gusts peaked at 75 km/h, and nearly 100 trees fell, causing trouble to the traffic (https://g1.globo.com/sp/vale-do-paraiba-regiao/noticia/temporal-com-ventos-de-mais-de-75-kmh-derruba-cerca-de-100-arvores-e-deixa-bairros-sem-energia-em-sao-jose.ghtml).

The lower and middle troposphere had very weak winds on te 05/03 afternoon, with low-level winds from the southwest at no more than 10 m/s. The precipitable water ranged from 40 to 45 mm, which is typical at this time of the year. This very moist environment helped in the high precipitation caused by some storms in the region. The 925 hPa winds and specific humidity in the lowest 100 hPa (figure below) show the very moist air mass over the area and weak 925-hPa winds. However, the sea breeze at this time caused inland-directed winds, and enhanced low-level convergence over the Paraiba river valley at this time. 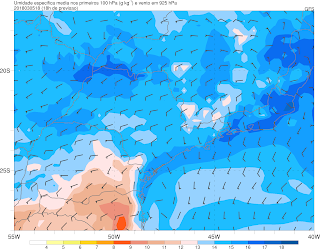 The reflectivity core that passed over São José dos Campos is shown below. The highest reflectivity was nearly 55 dBZ at 1.0° elevation, which characterizes high amounts of hydrometeors. The most affected area was the south of the city, exactly where the convective core is located at 1920 UTC. 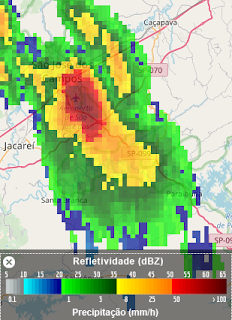 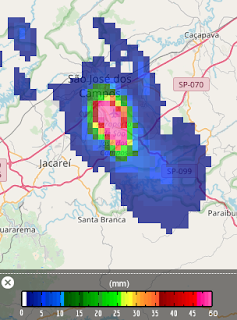 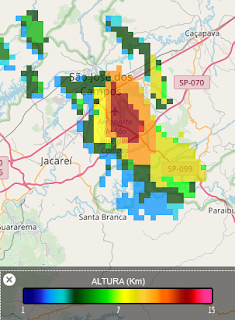