A strong cold front was responsible for the formation of a squall line over São Paulo state on the morning of 19 May 2018. This system caused severe winds in the city of São Paulo which were accompanied by fallen trees and power lines (https://g1.globo.com/sp/sao-paulo/noticia/bombeiros-recebem-mais-de-30-chamados-para-quedas-de-arvores-em-sp-apos-chuva-forte-com-rajada-de-vento.ghtml). The strongest wind gust was 93 km/h in the Guarulhos airport.

The strong cold front approaching São Paulo state on the morning of 19 caused strong low-level northwesterly flow over the area, which contributed to relatively high wind shear and transport of warm/moist air ahead of the squall line. The GFS analysis show that CAPE was not very high, but sufficient to produce severe weather given the wind shear greater than 20 m/s. 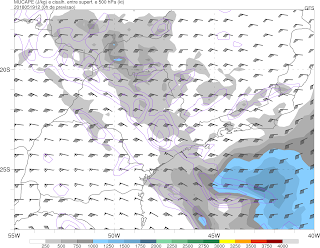 The 19 May 2018 12 UTC sounding of São Paulo depicts a relatively unstable lower troposphere, with warm air under relatively colder air in the midtroposphere. The winds were strong as well, with 40 kt just above the surface. This pattern of strong instability and high winds in the boundary layer favored severe wind gusts.

The radar imagery is shown below. A classic squall line is observed passing over São Paulo. The line caused very little precipitation.