Several severe storms occurred in central São Paulo state on 24 January 2018. The cities of Araraquara (https://g1.globo.com/sp/sao-carlos-regiao/noticia/chuva-forte-em-araraquara-sp-derruba-arvores-e-destelha-casas-veja-video.ghtml) and Bragança Paulista (https://g1.globo.com/sp/vale-do-paraiba-regiao/noticia/telhado-de-universidade-cai-durante-temporal-em-braganca-paulista-veja.ghtml) were the most affected.

The environment was characterized by relatively high geopotential heights in the mid and upper troposphere (Fig. 1), with anticyclonic circulation in the flow. This prevented strong convective overturning and guaranteed a low number of storms in the region, some of which were severe. São Paulo sounding was not launched in this day, unfortunately, but GFS estimative of CAPE ranged between 2000 and 2500 J/kg at 18Z. 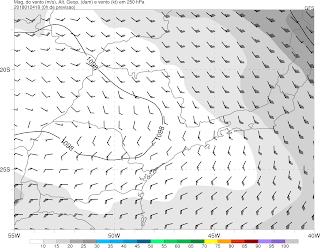 Among the most impressive characteristics of the storms that affected Araraquara and Bragança Paulista was the very high value of vertically integrated liquid (VIL). Figs. 2 and 3 shows VIL values over 50 mm in both storms, which was likely associated with high amounts of hidrometeors (mainly hail) in the troposphere. 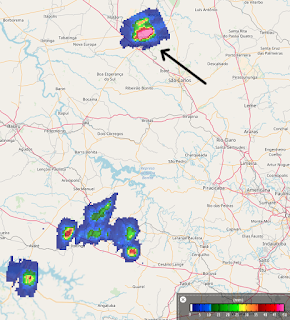 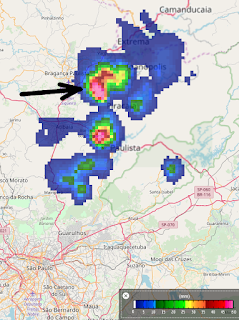 Some cities in eastern São Paulo state were affected by flash floods in 20 and 21 January 2018. On 20, Indaiatuba registered heavy rain and some river rise over the banks (https://g1.globo.com/sp/campinas-regiao/noticia/temporal-em-indaiatuba-desaloja-familias-derruba-muro-e-arvores-e-deixa-carro-em-pe-apos-ser-arrastado-por-enxurrada.ghtml). Some neighborhoods of São Paulo were also flooded due to large amounts of precipitation in a short period of time (https://g1.globo.com/sp/sao-paulo/noticia/enxurrada-arrasta-carros-e-pedestre-no-beco-do-batman-em-sp.ghtml and http://www1.folha.uol.com.br/cotidiano/2018/01/1952205-chuva-forte-derruba-arvores-e-alaga-ruas-na-zona-oeste-de-sao-paulo.shtml).

The synoptic environment will be accessed  using the 0000 UTC 21 January GFS analysis. The precipitable water was nearly 50 mm in the region, and the 700-hPa winds were very quiescent, which favors slow-moving convective systems and heavy precipitation. 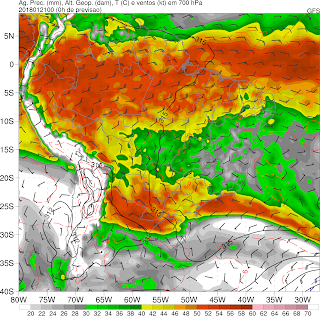 The sounding of São Paulo at 00Z 21 Jan 2018 shows a moist profile throughout the troposphere and very light winds. This sounding suggests the storms formed in the area had no organization due to the absence of wind shear, but posed a threat to flash flood because of the very slow storm motion speed and high precipitable water.

The storm occurred in  Indaiatuba on 20 Jan is show in Fig. 3 at peak intensity over the city. The storm system was moving east-southeastward and formed a line just before crossing the city. The sudden organization of the storm system seems to have contributed to the increase in VIL (Fig. 4), which reached more than 30 mm. 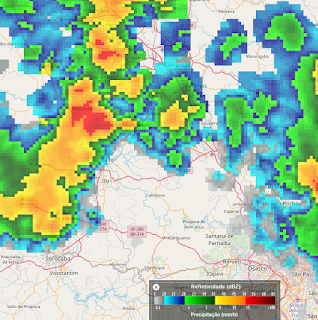 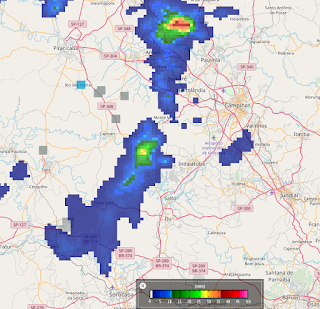 The other intense storm that affected Sâo Paulo on 21 Jan is shown in Fig. 5. Curiously, VIL was very low (< 15 mm) in this area, but this storm caused flash flooding. Even though VIL was low, the storm was nearly stationary. However, this case is an example of challenging nowcasting scenario, with low predictability. 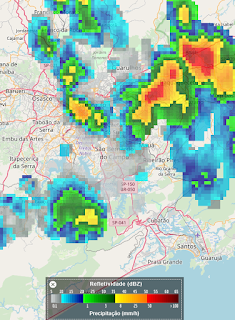 Posted by Unknown at 4:16 PM No comments:

In the afternoon of 18 January, a severe thunderstorm caused wind damage in São José dos Campos-SP. Several trees and power lines were downed by the storm (https://g1.globo.com/sp/vale-do-paraiba-regiao/noticia/chuva-e-vento-derrubam-arvores-nas-zonas-norte-e-sudeste-de-sao-jose.ghtml). High winds were also observed in Botucatu-SP (https://g1.globo.com/sp/bauru-marilia/noticia/temporal-derruba-arvores-e-prejudica-fornecimento-de-energia-em-botucatu.ghtml).
The São Paulo-SP 12Z sounding shows an unstable lower troposphere, with CAPE over 800 J/kg in the morning and 20°C of dewpoint temperature, quite high for São Paulo. After radiative heating, the CAPE would increase to more than 2000 J/kg. Also, the winds in the 1000-500-hPa layer are relatively strong for mid summer, which helped to organize the storms in the region.


Storm initiation took place over São José dos Campos at nearly 18Z along a north-south line. The storm attained high reflectivity (Fig. 2) over the city and remained stationary for about 1 hour. 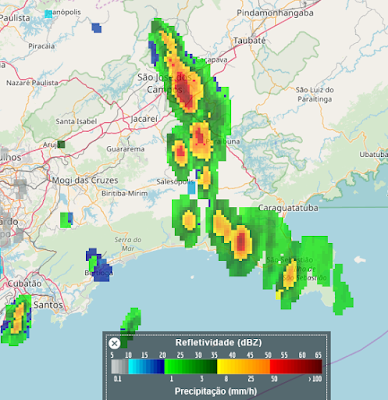 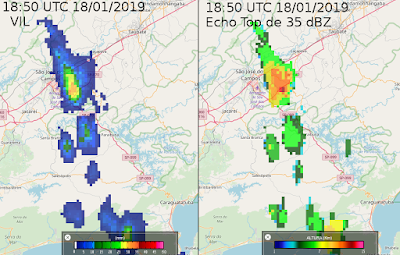 Posted by Unknown at 9:58 AM No comments: 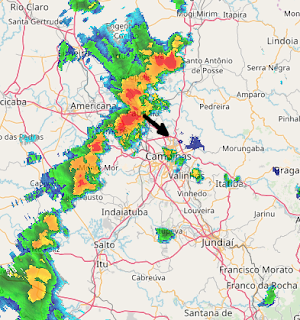 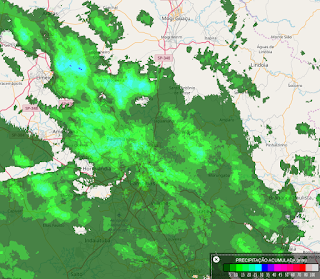 The synoptic-scale environment at 1800 UTC 25 December 2017 at 700 hPa (Fig. 3) was characterized by a high precipitable water corridor extending from the Amazon towards São Paulo State, in association with northwesterly flow in the lower levels. The precipitable water over the Campinas region ranged between 50 and 55 mm. Confluence was observed over São Paulo state between the 700-hPa ridge over Minas Gerais state and the cold-frontal trough over the Atlantic Ocean farther south. 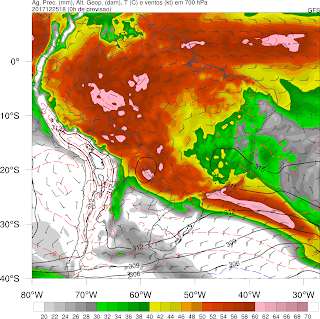 The 1200 UTC sounding at São Paulo-SP is shown in Fig. 4. The temperature profile was nearly moist adiabatic in the entire troposphere, but the radiative heating noted at surface increased the surface temperature and thermodynamic instability in the afternoon. CAPE values were around 1000 J/kg according to the GFS analysis. This setup of moderate instability, large-scale confluence, high precipitable water and moderate low-level winds favored the formation of moderately organized convection capable of heavy rain in the area.

Figure 5 shows the Vertically Integrated Liquid (VIL) before the squall line hit Campinas. VIL values were peaking at 20 mm in some areas within the squall line, which indicated the high potential for flash flooding approaching the Campinas area. This figure elucidates how a nowcasting system can be used to forecast high-impact events with several hours of leading time. 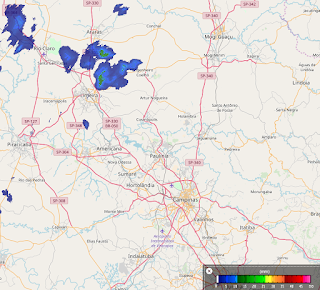