In the afternoon of 07 June 2018, severe storms affected the eastern São Paulo state and southern Minas Gerais state. The storms formed under a very intense upper-level jet, which caused deep-layer shear of more than 25 m/s in some locations. The thermodynamic instability was not high, but sufficient to promote convective updrafts along a stationary front, which in turn became severe due to the very high wind shear.

The GFS MUCAPE fields are shown below. Eastern São Paulo had nearly 1000 J/kg of CAPE associated with 25+ m/s of 1000-500-hPa wind shear magnitude. The São Paulo soundings of 07/06 1200 UTC and 08/06 0000 UTC show very strong winds from low to upper levels of the troposphere, and moderate instability in the midlevels. The storm-relative helicity values below -100 m²/s² are very favorable for rotating, long-lived storms, as the ones observed in the region. 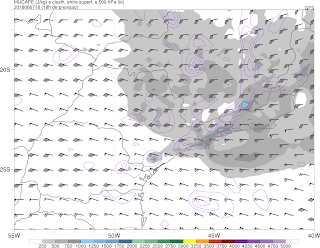 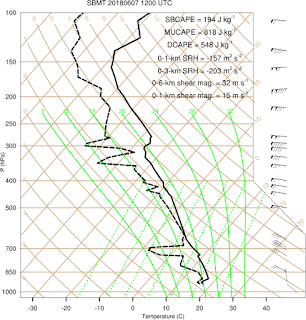 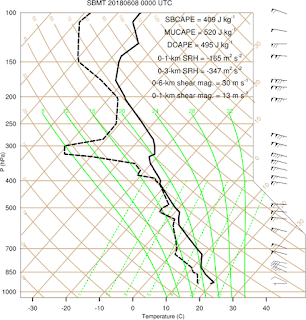 The storm that moved across São Luiz do Paraitinga-SP, causing 2+-cm hail and high winds is shown below. The 35-dBZ echo top peaked at more than 15 km height, which is an extreme value. 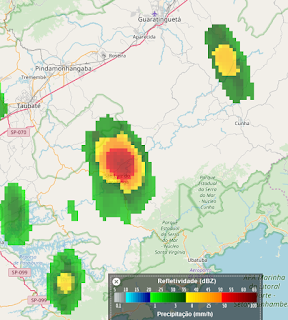 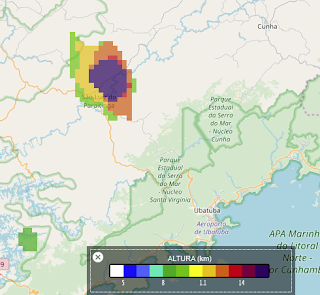