Thunderstorms stroke São Paulo city in five consecutive days in the end of March 2018. Multiple flash floods and fallen trees were reported throughout the city (https://g1.globo.com/sp/sao-paulo/noticia/chuvas-causam-queda-de-89-arvores-em-sao-paulo-no-feriado.ghtml), causing chaos in the traffic.

A stationary trough was located over the Andes of northwestern Argentina and northern Chile. A low-pressure system was located over Paraná state and provided continuous northwesterly flow from the Amazon Basin towards São Paulo state.  In the afternoons, the moisture-rich environment was suitable for deep convection.

The sounding from 28 March through 31 March at 12 Z are shown below. The soundings are very similar, corroborating the stationary regime in which the storms occurred in these consecutive days. All soundings show very weak winds in the middle and lower troposphere, and a nearly moist-adiabatic profile.

Some radar images are shown below to exemplify the storm modes observed in the region. The convection was not very intense nor organized, but the fact that it occurred in a city with poor drainage was the key factor. 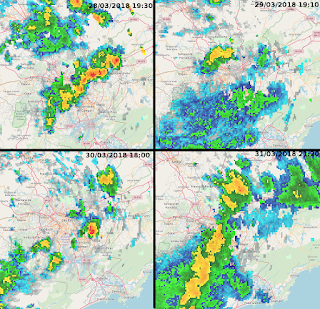